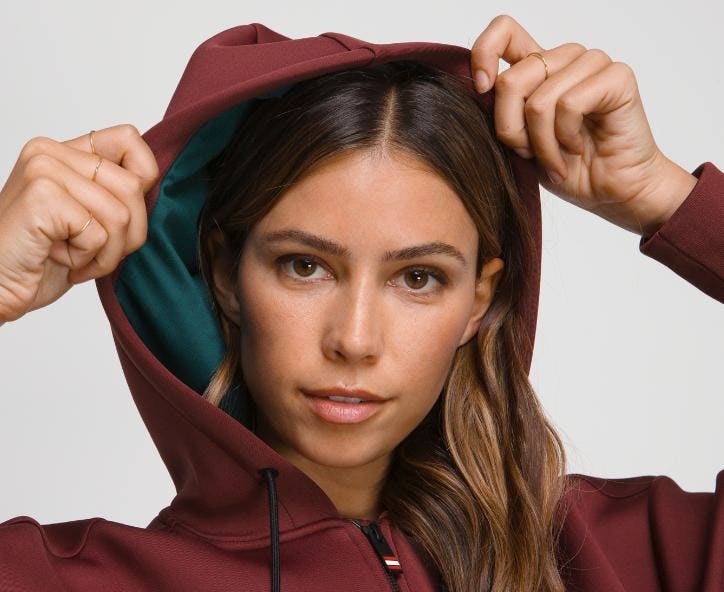 The stripes winding their way across shorts in the new basketball-inspired Wilson Sportswear 008 release have an obvious equipment tie-in, taken from the bonded seams on a leather basketball. A shirt from the tennis-inspired 007 release features a pocket with color blocking mimicking Wilson’s top-selling tennis rackets.

Wilson Sportswear may be the freshest take for the 1913-born Chicago-based brand, but as Wilson moves into apparel in a mainstream way the brand isn’t leaving behind its heritage.

“We absolutely want to respect the heritage and infuse technology and performance that didn’t exist,” says Joelle Michaeloff, Wilson Sportswear head of design. She says grabbing vintage logos and pulling from small nuggets from the past allows Wilson Sportswear to leverage and highlight the firsts it had in equipment, but then do it in a modern way, with new materials and construction—think abrasion-resisting seams and ventilation—built for modern sports and lifestyle.

While Wilson has led in sports equipment for over 100 years—the brand is currently the top-seller of tennis rackets, owns multiple baseball bat makers and is the official ball of the NBA, WNBA, NCAA basketball and NFL—a summer launch of Wilson Sportswear was the brand’s foray into apparel that could be classified as lifestyle, but built from performance materials. And this wasn’t a one-launch-and-done situation, instead releasing a new sport-inspired collection every two or three weeks, a cadence Wilson continues. Whether a golf-inspired batch, basketball-infused designs or tennis-related collections, the Wilson Sportswear rhythm has been quick.

“When we set up to launch this, we created what is called the starting lineup,” Michaeloff says. “Each delivery builds on itself. There is a thread that runs through, so when we have each of these drops, you can pull pieces from earlier drops, and they work together. There are absolutely repeated styles.”

Michaeloff says the release pace allows Wilson to interact with customers more often. The typical Wilson consumer has been a hard goods one, whereby the nature of the product they aren’t constantly returning to the brand. “We really wanted to continue to connect with the customer and develop the relationship,” she says. “We have awesome things to share, and we want to promote sport in the world. We have so many cool stories to tell and my mission in life is to create awesome things that inspire athletes to play.”

So, while Michaeloff designed the starting lineup—at the outset she was the only designer on the Wilson Sportswear staff but now has a small team—to be inclusive of any sport, she used the “authentic” tie-ins to key Wilson sports, such as tennis, golf and basketball, to bring history into the styles. Expect that to expand when future collections have touches of football (including a design featuring the same leather as in a football) and volleyball, among others.

Wilson Sportswear has already shown a desire to capitalize on relationships the brand has formed as a longtime equipment manufacturer. Working with Kith on a recent large-scale tennis release around the U.S. Open in New York City highlighted plenty of apparel designs, along with hard goods. Michaeloff says Wilson’s authenticity in sports equipment has made it so other brands want to work with them. “It makes it pretty easy to engage brands I have only dreamed of working with in my career,” she says. More collabs remain in the offing.

The latest release, Wilson Sportswear 008 available online Oct. 14, comes as a basketball-inspired collection, a subtle nod to Wilson returning as the official ball of the NBA. This, the second basketball-inspired collection so far, pulls inspiration from past catalogs and refreshes styles by bringing colors reminiscent of team sports. Expect to see a mix of lifestyle hoodies, jackets and fleece. At the same time, the basketball short remains a constant, with the cut-and-sew style of the original catalogs and the stripes a play off the bonded seams of the leather ball. Those same stripes appear on biker shorts and leggings.

Ties to heritage weave through all the collections. Michaeloff offers an example of cuffs on the sweatshirt. Wilson used a jacquard knit on the brand’s original warmups because spandex didn’t yet exist, and jacquard was a knitting technique to keep the sleeves in place when pushed up higher on the arm. In the new French terry design, she says the sweatshirt feels modern, but a look at the cuff offers a tiny nod to heritage, using “a beautiful premium technique (jacquard) that reminds us of our past.”

“For me, it is always about respecting our heritage and where we’ve come from and who are in this space,” Michaeloff says. “I have this deep passion and drive to live up to what we’ve already been creating and take it to the next level. If we started coming out with a DNA that was radically different, it would be uncomfortable and not respecting our past. There is a delicate balance of learning from where we have been and bringing it into today.”

The nod to the past continues with what Wilson refers to as the “red thread.” There is a small hit of red that follows through the collections. Sometimes it shows up on the tip of a draw cord or on a zipper. Sometimes it comes completely hidden and other times it gets amplified. The red stripe was found on one of the brand’s original tennis rackets and while Wilson doesn’t want to make the stripe a focal point, Michaeloff says bringing back a heritage element and making it relevant for today signals to the customer there is something more to discover in each piece of Wilson Sportswear.