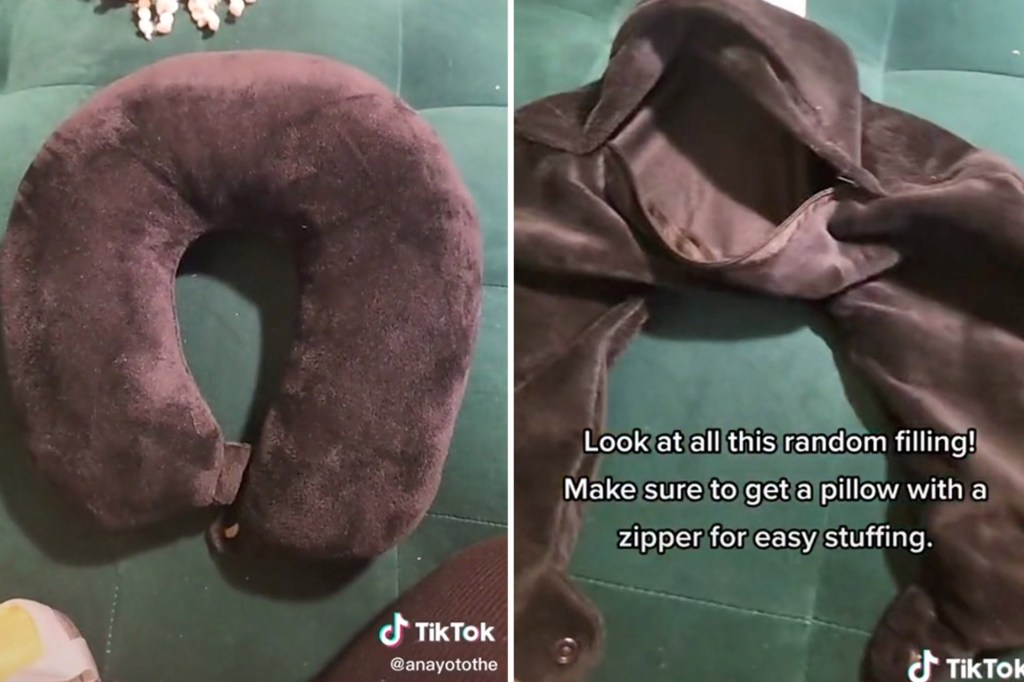 A traveler has revealed a trick to avoid paying for extra hand luggage when she catches a flight.

And all she needed was a popular item that a lot of people already have – a travel pillow.

The woman, who uses the handle @anayotothe, shared a video on Tiktok showing her pulling the stuffing out of a travel pillow to make storage space for her clothes.

She said: “Trying the Spirit and Frontier pillow hack cuz I ain’t tryna pay $60 for a carry on.

“A few weeks ago I saw a travel hack on Tiktok for the budget airlines that don’t let you carry on a bag. Instead, you can use a travel pillow as additional storage.

“So I got this pillow from Walgreens for $9 and holla there’s a zipper.”

She then unzipped the travel pillow and pulled out the stuffing.

She continued: “Look at all this random filling! Make sure to get a pillow with a zipper for easy stuffing.”

Next, she panned the camera round to show the clothes that she couldn’t fit into her rucksack, which included tops and dresses.

She said: “Here’s my luggage. Let’s see if I make it on without paying.”

The two videos have been watched more than 900,000 times, and commenters were grateful for the hack.

One person wrote: “Yes I will try this. I’m not paying more for luggage than the flight cost.”

Another commented: “Girl [you] must’ve known I just booked a Frontier flight and swiftly denied bags. Def gonna try this.”

Flight attendants also got involved, praising her for the tip and confirming others doing the same wouldn’t be charged.

One commented: “As a Spirit flight attendant, this is brilliant! I saw good for you.”

A second wrote: “I work at Spirit and I do charge people, but if she has that then I promise no one would say anything.”

Another woman has revealed how she always takes an extra bag on flights for free.

A Tiktok user has gone viral for revealing a free way to take extra items on a plane.

Here’s why you should always take a picture of your luggage before you get on a plane, according to a frequent flyer.

This story originally appeared on The Sun and has been reproduced here with permission.