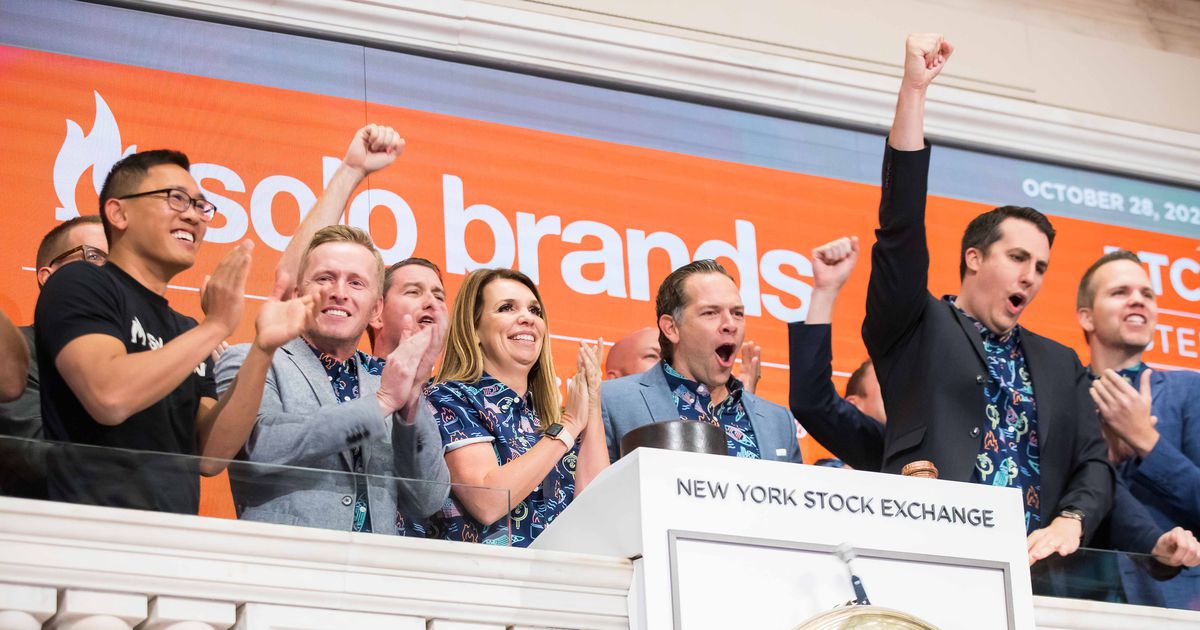 Solo Brands debuted on the New York Stock Exchange on Thursday, its stock price soaring to the high end of the expected range and valuing the company at $2.1 billion. The company raised $219 million with its offering of 12.9 million shares priced at $17.

It sells products ranging from what it calls a “virtually smokeless” fire pit and high-performance outdoor apparel to inflatable paddle boards and folding kayaks. The company had $225 million in revenue in the first half of 2021, according to a filing with the U.S. Securities and Exchange Commission.

The company’s portfolio includes Solo Stove, the Chubbies apparel brand, Oru Kayak and paddleboard maker Isle. The company began with just the Solo Stove when it was founded in 2011 by two brothers in a Fort Worth garage. It made three acquisitions earlier this year and rebranded as Solo Brands. Traeger Inc. and Weber Inc., two other grill manufacturers, also went public this year.

“It’s a massive tip of the cap to our customers who are the ones that got us here,” Solo Brands CEO John Merris said of the company’s IPO.

Outside the stock exchange where Merris, Solo Brands employees and NYSE executives rang the opening bell Thursday, the company hung a banner that read, “To our customers, this one’s for you. THANK YOU.”

Since Merris joined the company as chief executive in 2018, its employee count has grown from the single digits to 170 in North Texas and another 70 in Austin, he said. Before joining Solo, Merris was chief revenue officer at Fort Worth-based Clarus, which produces glass whiteboards.

This is the first time Merris has ever taken a company public.

“This is the first step in what we we expect, on our side, to deliver for the next decade and beyond — that incredible growth and results,” he said.

Solo Brands will move into a new headquarters next month in Grapevine near the north runway of DFW International Airport. The 430,000-square-foot site will include warehousing, fulfillment space, 50,000 square feet of offices and a product showroom.

And the roof will feature a giant flame — the company logo — that will be visible to passengers as they land, Merris said.

Solo Brands made headlines earlier this month when it bought Chubbies, a lifestyle apparel brand with a cult following, for $130 million. Merris said Solo was “fascinated” by the company’s online business.

According to a filing, Chubbies has grown its annual sales from $2.4 million in 2012 to $44.1 million in 2020. Solo Brands sees potential for more growth.

In 2020, more than 80% of Solo Brands’ sales came from consumers ordering directly from its websites, according to a filing.

“It’s been our model for the last 10 years since we started,” Merris said of the company’s strong direct-to-consumer sales. “All the pandemic data really accentuated the great business that we were, and how much it makes sense in today’s day and age. It just became so easy for customers to transact with us.”

Solo’s individual brands also boast a digital reach numbering in the tens of millions. Together, they generated around 42 million unique site visits in 2020, and the brands have more than 4.5 million followers on social media, according to a filing.

“It truly has been about listening to the voice of the customer,” Merris said. “We believe that the future of consumer business is going to be built on the backs of one-on-one relationships with your customers,” Merris said.

Solo Brands is also expanding internationally. It will focus on Europe and Australia before expanding further into Africa, Asia-Pacific, the Middle East and South America. Solo Brands operates three warehouses in the U.S. and one in the Netherlands.