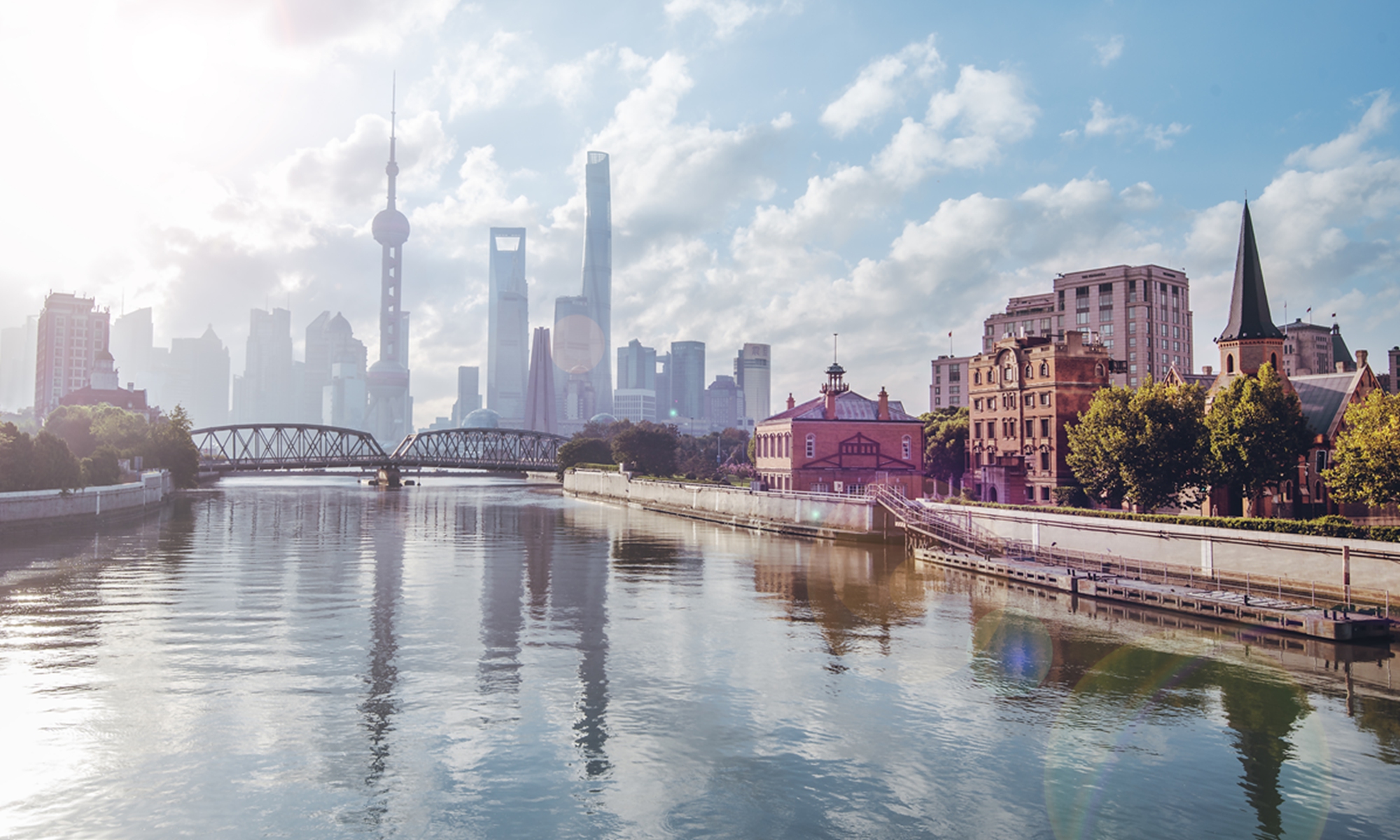 A view of Shanghai. Photo: VCG

Shanghai, also known as the “Pearl of the Orient,” has been in static management, which requires all residents to stay put, for over a month. Despite the real challenges in daily life brought about by the COVID-19 outbreak, from being fashionably dressed when taking nucleic acid tests to groups buying coffee and burgers, Shanghai residents have not abandoned their efforts to maintain a lifestyle commensurate with the famed city, which is rooted in Shanghai’s history of prosperous business and trade, and unique culture.

The Global Times has presented a series of stories as they unfold during Shanghai’s ongoing battle against COVID-19 and the citywide static management. This is the third installment featuring a special city culture of elegance. 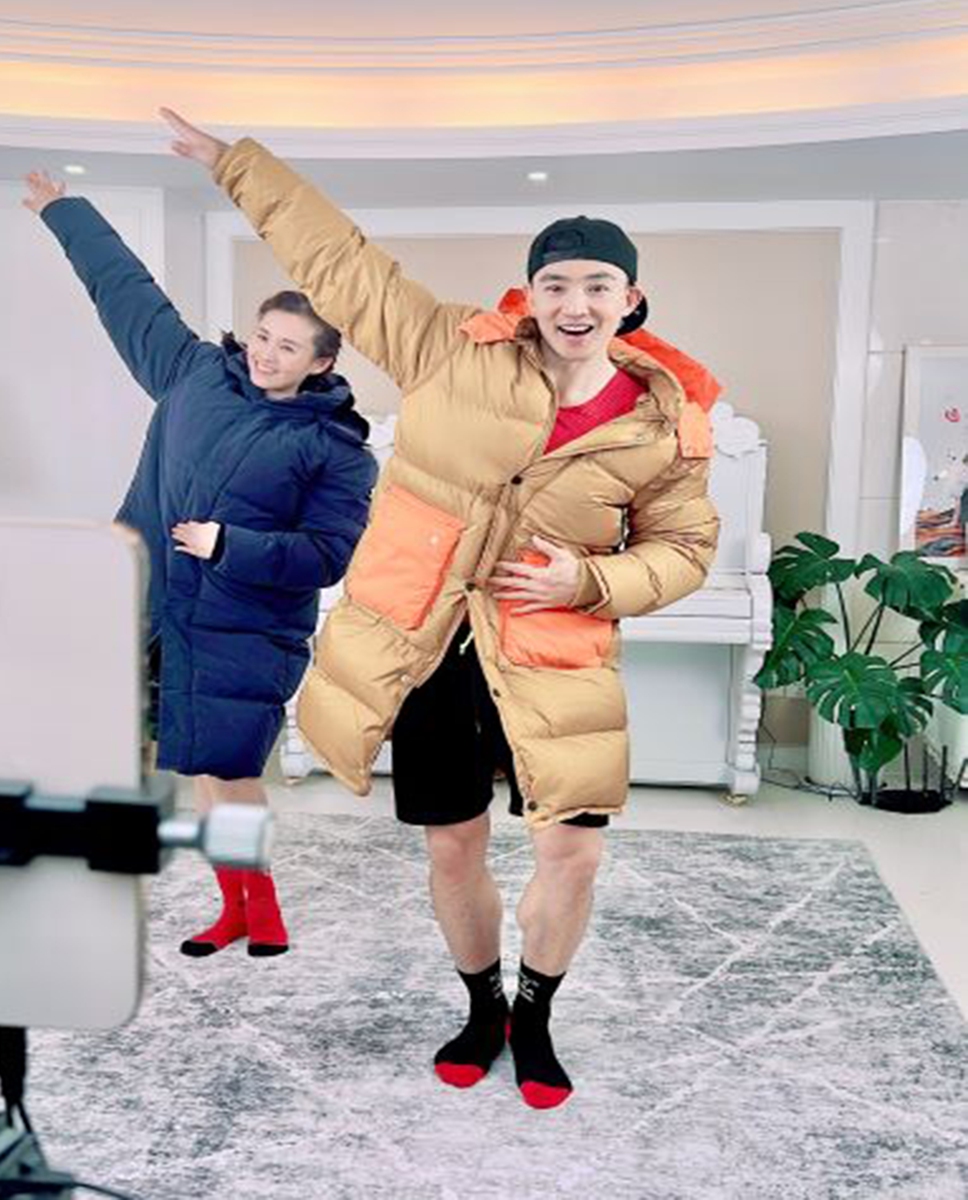 Will Liu Genghong livestreams a workout session at home during quarantine in Shanghai. Photo: IC

One man in Shanghai has become more popular than the livesteaming sales star Li Jiaqi — Taiwan-born entertainer Will Liu Genghong who became a hit as he encourages millions to join livestreamed workouts with him and his wife Vivi Wang, adding a stroke of positivity to the megacity of 25 million residents which is fighting an arduous battle against the Omicron variant.

Liu has been doing livestreaming workouts for months but has become a hit in recent days, accumulating more than 40 million followers on social media platforms Douyin and Xiaohongshu, attracting up to a million views per session.

Energetic and cheerful, Liu’s fitness skills are in stark contrast to that of his wife, Wang, who seemingly struggles to keep up to the dynamic music-powered workouts with comical expressions, and sometimes his mother-in-law joins in the fun.

Unlike other workout livestreamers who have few words during their online sessions, Liu is somewhat naggy in pushing his wife to continue while encouraging online viewers and providing instructions throughout the workout.

“My face during the exercise is exactly like Vivi’s, and Liu’s encouragement cheers me up. Working out with him is not only for physical health but also a fun thing that is rather precious at such a special moment,” a Shanghai resident told the Global Times on condition of anonymity.

The videos have encouraged many alike in Shanghai, who are stuck at home, to maintain lively and optimistic outlooks in the face of difficulties and challenges.

Acknowledging the difficulties that many Shanghai residents are dealing with during the epidemic controls, including challenges to get daily necessities and non-COVID medical services, an anonymous Shanghai resident believes there is a tenet that has been supporting her and many other people in Shanghai — to live to the fullest despite current conditions.

The tenet is particularly important to Jiao Zijun, a hanfu (traditional Chinese clothing) enthusiast since 2016 who has been quarantined at home since late March.

April in Shanghai is a month of mild weather, with an abundance of verdure and the blossoms of all different flowers, and also a time when hanfu lovers usually organize all kinds of outdoor activities to celebrate the beauty of spring.

Since such activities are impossible this year, Jiao initiated a “hanfu-at-home challenge,” encouraging her peers to wear the traditional costumes they love even when at home.

Putting on hanfu, doing traditional makeup, creating traditional hairstyles, and then taking a selfie, the “challenge” is time-consuming, but pleasant, Jiao told the Global Times.

Every weekend during the lockdown, Jiao and three to four hanfu-loving friends will decide on the main theme — a song, a film, or an ancient dynasty — and dress up in accordance with the theme.

“The lengthy yet pleasant preparation and online chatting remind me of those great moments when we sing and discuss traditional culture together. We get closer even though we cannot meet face to face,” Jiao said.

The process also relaxes Jiao, making her less worried about the ongoing epidemic and she tries to engage more people to participate in the “challenge” by promoting the activity online.

“I hope the beauty of traditional clothing and culture can help disperse quarantine boredom and cheer people up. A positive life needs certain rituals,” Jiao stressed. 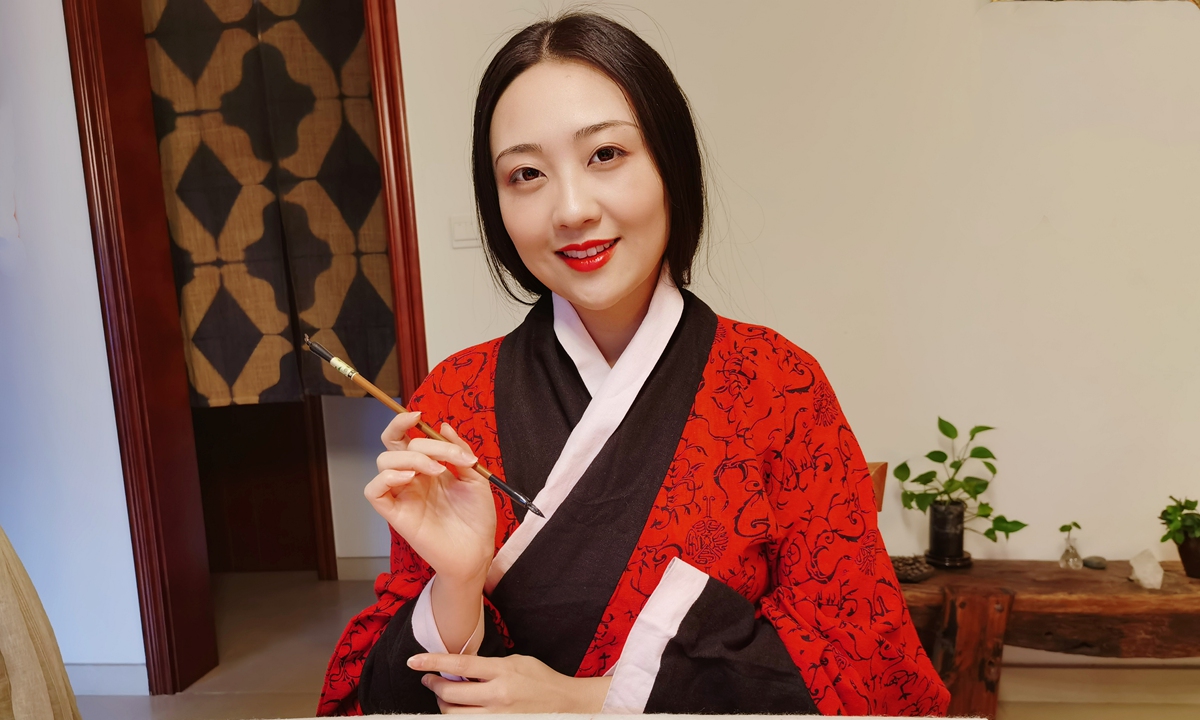 A hanfu enthusiast, Xu Yueer, in a hanfu costume during home quarantine amid Shanghai’s lockdown. Photo: Courtesy of Xu

Jiao and her hanfu community are not alone on the matter of dressing up as some Shanghai residents have turned the long mass nucleic acid testing lines into a “fashion runway.”

Shanghai residents would dress to the nines when the city started to mass test its 25-million-strong population with the assistance of medics from across the country to aid in the battle against the virus.

A Belgian, Tobias, posted online that Shanghai’s people are determined to show their fine life to the nation even though they are fighting the virus. Tobias took a shower, shaved, put on his suit and tie, and sprayed some perfume before going downstairs for the test on April 4.

According to photos and video clips circulating on social media, some wore formal attire like business suits and evening gowns, some wore Haut couture looks akin to a fashion runway, and some chose to amuse their neighbors with outfits ranging from fluffy dinosaur pajamas to ancient soldier armor replicas and hula skirts.

Such fashion choices ignited controversy as many people argued whether it was an appropriate time to be fashionable when the priority should be the battle against the Omicron variant, but like Shanghai resident Ada Pan said, it is a sense of romance that can save people from a bad mood in the current unprecedented static management and enduring real-life hardship.

No matter what residents dress up in, they are receiving tests and cooperating in epidemic control properly, some defended online.

There was also news about a balcony fashion show at a compound in Pudong New Area that is said to be home to Shanghai Disney Resort and New York University Shanghai employees.

A viral video shows residents in quarantine dressed up like they are going to a spring picnic or party, wearing fantastical costumes like Batman and Disney princess gowns, and received comments like “fashion is encoded in Shanghai’s DNA” and “[the] Virus cannot stop [the] carnival parade.”

Pan, a Shanghai native who just graduated from a US school this year, noted such instances were more common in the early days of restrictions when people were lighter-hearted. After the situation escalated, people also began to treat the epidemic with a serious attitude, and jokes were replaced with mutual help and solidarity.

There must be a balance because people need some sort of spiritual comfort during strict epidemic control, Pan said.

When difficulties to get necessities grew more acute, a “bartering relay” offered some much-needed reassurance to Shanghai’s people and netizens who care about the situation in this megacity.

The trend started when a resident put half a dozen cans of cola in the hall of his residence and offered them to his neighbors free of charge. Other residents, after taking the cola, returned the favor with pepper sauce, boxed milk, instant noodles and beer, seeking joy amid the hardship.

Besides cola, there are other unexpected “present” like cats, which can be lent to neighbors as furry emotional support companions.

“There is a sense of humor, resilience, and caring nature along with great solidarity in Shanghai,” a comment read on Sina Weibo.

A group buying scenario that made headlines was at a luxurious compound in Shanghai where residents jointly bought 20,000 yuan ($3,047)-worth of Shake Shack burger combos in late March. 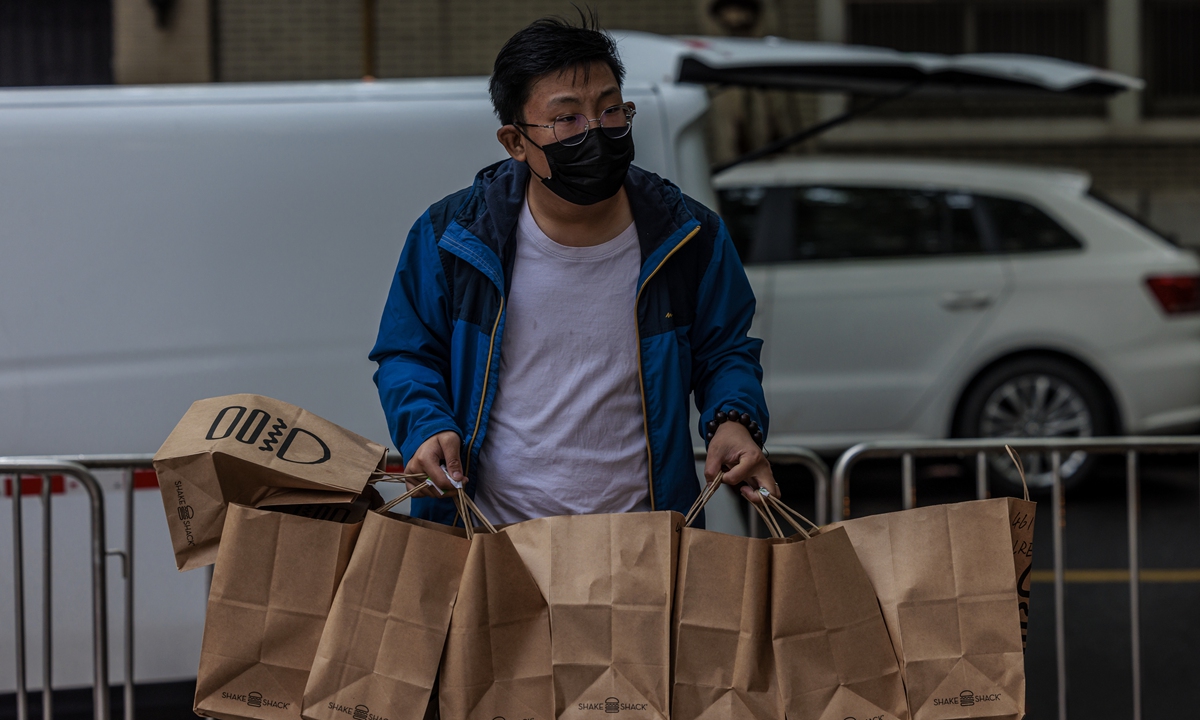 A delivery worker brings a large batch of Shake Shack burgers to a residential community under lockdown in Shanghai on April 23.Photo:IC

Coffee is unsurprisingly another hot commodity in Shanghai, the absolute bellwether in China’s coffee consumption.

A Shanghai resident who only gave his first name, Xingyi, shared the experience of being in a coffee bean buying group on WeChat organized at his compound.

“I first thought it might be difficult because there may not be many people in need of coffee, unlike fresh food. But to my surprise, our community reached the threshold of 100 bags in a few hours,” Xingyi said. He also heard that some people who had ground coffee but had run out of drip coffee bags started to use Chinese parchment paper instead.

This drink is as important as fresh vegetables, eggs, and milk for Shanghai residents who have “grown up in the aroma of coffee.”

The megacity had nearly 7,000 coffee shops as of January 2021, the highest of all metropolises, and the number is estimated to have increased to 8,000, according to industry insiders.

Shanghai residents drink 25 cups a year and 50 cups for 10 million core consumers, while the average number in China is 5. Drinking coffee is a routine for not only young generations but also many senior citizens, including the septuagenarians.

Arriving in Shanghai as early as the 1840s with other foreign commodities, coffee has become a symbol of Shanghai’s delicate lifestyle.

Bearing a long history of opening up and foreign trade, accommodating one of the largest expat communities in China, and the workplace for 10 million people from across the country, Shanghai demonstrates a unique culture of fashion and modernity. 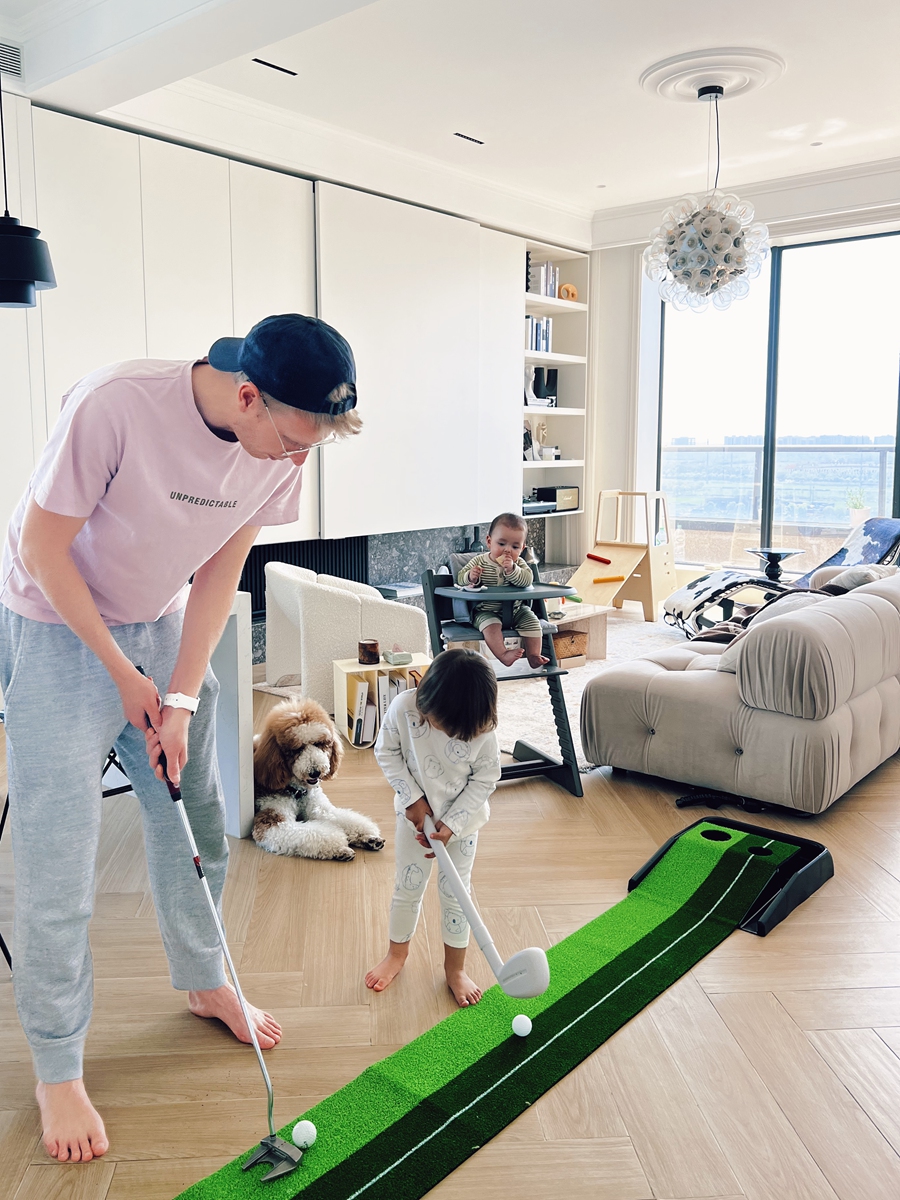 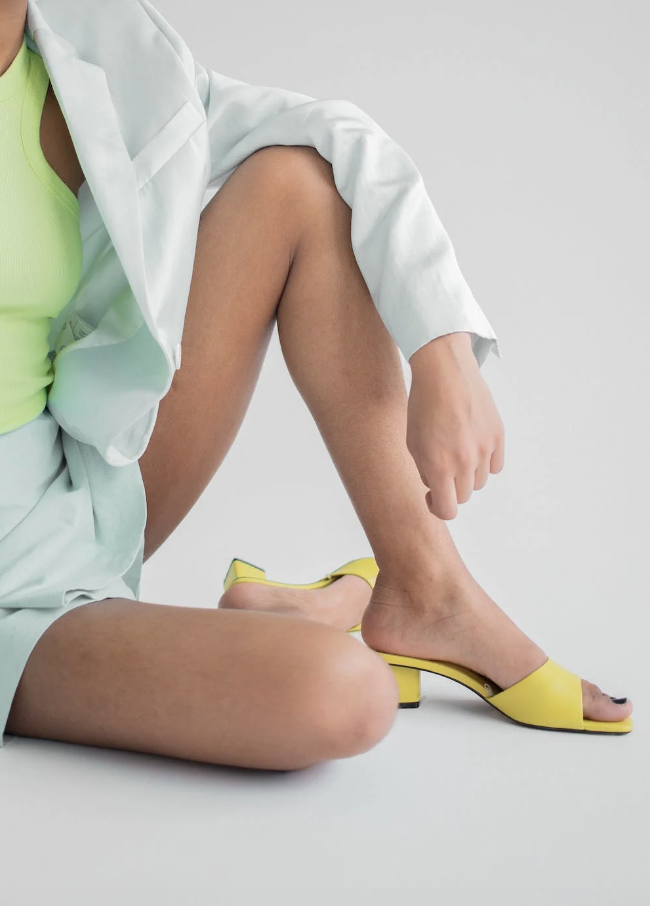