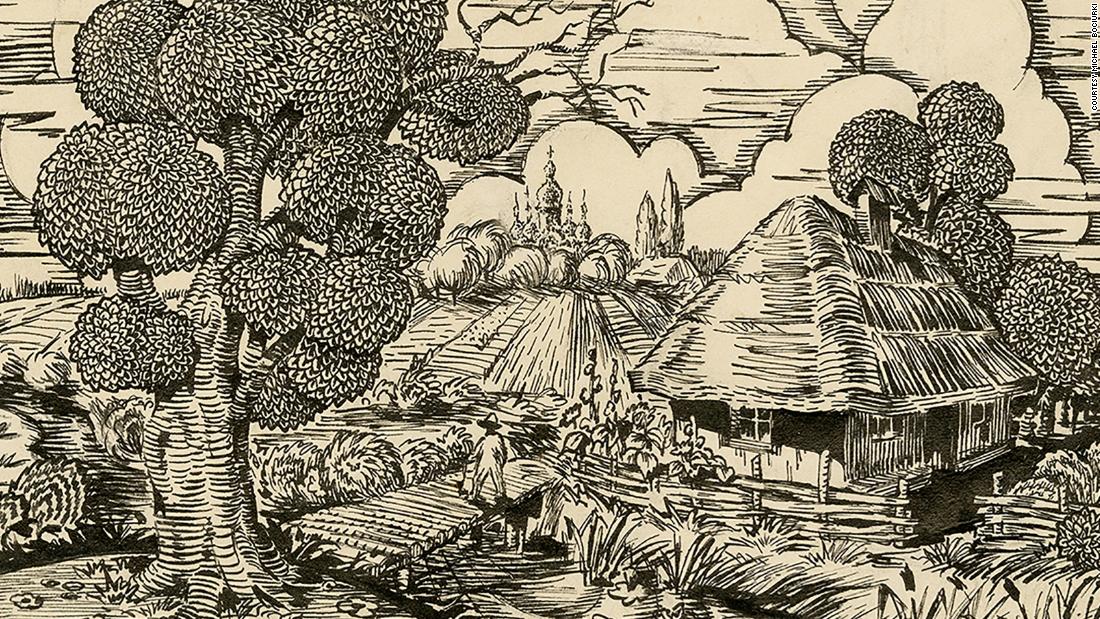 The picture of a quaint village was based on Bohdan Bociurkiw’s memories of living in western Ukraine as a student and scholar, shortly after he left a refugee camp in Europe and migrated to Canada in 1947.

Bucolic, peaceful and rustic, the scene always had pride of place on the walls of our various homes in Canada and around the world. For many years, it was how us kids fantasized about the land of our ancestors.

Now decades later I have returned to my parents’ homeland to report on the war for global media — and find the sleepy village scene of memory transformed into a nightmare.

I have witnessed firsthand the destruction by Russian forces of large parts of Ukraine —including villages not dissimilar to that sketched by my father — and am struck by a deep feeling of loss.

With the land of my ancestors going through this bloody, existential fight for survival, the pull to remain is as powerful as ever.

To be closer to the war — and a potentially historic redrawing of Europe’s security architecture — is a major reason why I have decided to give up my enviable lifestyle on the Pacific Northwest.

I will be going in the opposite direction of many others in Ukraine, packing up my waterfront condo on Vancouver Island to be closer to the front line to articulate why this complex war matters.

I have no illusions about the potential danger of basing myself in Lviv, a Ukrainian city on NATO’s doorstep and near key weapons supply routes for the military.
In many parts of Ukraine, after more than 100 days of war, it’s as bad as it gets. The Russian military has committed unspeakable potential war crimes reminiscent of the horrors seen in Chechnya — including reports of mass rape (including of young children and elderly grandmothers), shooting of civilians, cleansing of dissidents, summary executions, filtration camps and the forcible deportation of hundreds of thousands of Ukrainians to Russia.
Many of my relatives were forcibly deported to the Soviet gulag, never to return. Who could have imagined that decades later Ukrainians are once again facing mass deportations in 2022.

As soon as we had thought we had witnessed the ultimate of inhumanity, the Russian war machine manages to prove itself capable of going even further.

I suspect that my late father would have reacted to the Russian invasion of Ukraine with little astonishment.

Having been the victim of Russian aggression and several attempts to silence his own voice of dissent, what is playing out now across the country feels very much like history repeating itself — from the liquidation of Ukrainian culture to the burning of churches (Ukrainian President Volodymyr Zelensky says Russian forces have “destroyed” 113 churches since the start of the war) and the stealing of grain from Ukrainian ports, to the mass forced deportations to Russia.
My father, a Sovietologist with a focus on church-state politics, was so despised by the Kremlin that he was prevented from returning to the then-Soviet Union to attend his own mother’s funeral just outside of Lviv. Up until Ukraine’s independence in 1991, he was refused access to KGB archives for his book on the persecution of the Ukrainian Greek Catholic Church.

Over the past weeks, as I’ve walked the cobblestone streets of this city found in the late Middle Ages, I often wonder if I might be retracing the footsteps of my father and other ancestors.

When the urge hits to complain of my spartan accommodation, the middle of the night air raid sirens or the stench in our bomb shelter, I think back to the near death encounters my father had at the hands of the German Gestapo and Soviet authorities. He kept himself alive by creating works such as the homeland painting, which is why it holds special meaning to me.

On my many trips to Ukraine I’ve always felt the spiritual pull towards Lviv and now it has taken on greater importance as a humanitarian aid hub and a temporary safe haven for almost a quarter of a million displaced people.
Well before the war, Lviv was known as the birthplace of many of the patriotic heroes, artists and political leaders; the Ukrainian language is widely spoken and its historic and cultural sites have earned it pride of place as a UNESCO heritage site.
That is why I have long feared that a twisted mind such as Putin’s would regard it as a tempting target. So far the historic Lviv city center has been spared but long-range Russian missiles have struck nearby on several occasions, including as recently as June 1. To see so many of its prized cultural artifacts and church windows shrouded or boarded up pains the heart.

While the focus of the brutality has been in the east — hundreds of kilometers away in places such as Mariupol and Donetsk and Luhansk — cities such as Lviv have also sent their sons and daughters into battle in large numbers.

In the past weeks in central Lviv, it’s become impossible to ignore the daily funerals for Ukrainian servicemen who’ve come home from the front line. On some days three at a time are sent to rest. The historic Lychakiv cemetery where they’re taken is now overflowing to the point where fresh graves had to be dug outside its hallowed walls.

Despite the losses on the Ukrainian side, support for the war remains high. We’ve seen it everyday in patriotic slogans such as ‘Slava Ukraini’ (glory to Ukraine) that have become everyday greetings.

Watching the tearful goodbyes at the military funerals or in my visit to Lychakiv, I get the feeling that loved ones nonetheless feel a sense of pride for their sons paying the ultimate price to defend their homeland. At a double funeral last week, the priest told the families of the departed: “Your sons are still working hard from the heavens to protect you; they haven’t really left us.”

A Ukrainian friend, Ania, recently asked me how many times I’ve cried since the war started. I replied twice — and almost another time live on CNN.

Earlier, when the threats to Lviv, my base for most of this war were much more acute, simple acts like taking a shower or enjoying a meal out seemed precious given it could be the last for a while if we were forced to evacuate. Hugs with loved ones become tighter. Dreams start to include images of war. It takes a lot less to trigger tears.

Recently I left Ukraine for a break and to start, at least for me, what will be a significant relocation. War brings a clarity of mind. You quickly realize how little you need to live on and that life is fleeting. I’ve discovered I am in the right place, at the right time, doing exactly the thing for which I am best suited.

Life is strange but beautiful. Just a few days ago, as I packed up my waterfront condo, a wonderful local couple dropped by to collect furniture for incoming Ukrainian refugees. I am still trying to process the circle of history that presented itself here. Belongings that were passed down to me from parents who had to flee Ukraine decades ago are going to people fleeing violence in the same country.

Tato would be proud.