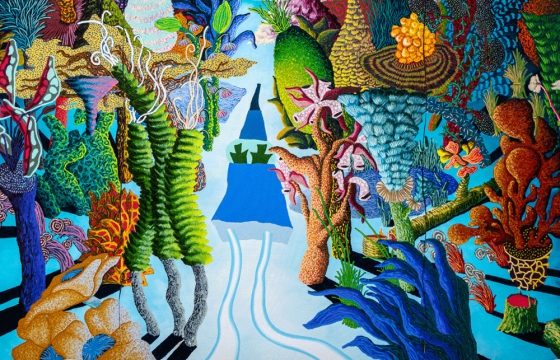 Finding inspiration from eclectic sources—natural phenomena, pseudoscience, prehistoric narratives, theoretical physics, and popular media—Greenwald conjures an alternate reality. Through repetition and kaleidoscopic patterns, Greenwald portrays scenes of a lone car coasting through lush jungles or barren valleys, terrains he describes as “generic representations of location.” Above, twin planets float in the sky, illuminating the expansive landscapes. Each piece is executed on non-rectangular supports with wavy, beveled edges and rounded corners. Some frames resemble the shape of oversized eggs, as in seasonal egg and smart mouse trap, while others are vignetted at the top quadrants, as in Lou’s painting and never lose your shadow. With a combination of acrylic paint and oil stick, Greenwald generously applies his vibrant palette, giving his compositions a bodily and tactile presence. By imbuing the paintings with chromatic intensity and impasto surfaces, Greenwald embraces the hallucinatory overtones of his imagery, seeking to stimulate the experience of synesthesia; it is as if they could activate all the senses simultaneously through the potency of their visual characteristics.

Among Greenwald’s iconic paintings are two life-size, freestanding sculptures, a return to what the artist would consider his foundational practice. To construct them, he affixed found objects and studio detritus to carved logs and branches. Some sections are coated in his signature bright hues while other areas are left in their unaltered state, allowing the aesthetics of artifice and nature to commingle. The scale of these assemblages evokes a figurative presence with an otherworldly appeal, as their contours vastly differ from the human form. 2 planets in particular hints at a pair of totem poles, with spear-like shapes stretching upward atop painted bases that resemble engorged pupils in blood-red irises.

While Greenwald simultaneously addresses themes of a primitive past and sci-fi futurism, his formal strategies and humorous approach allow for a studio output that resists tidy classification. Merging modern phenomena with prehistoric motifs in ways that recall the clunky props found in pre-computer, analog film sets or the stylings of television programs like Pee-Wee’s Playhouse, his work has a flavor of postmodern simulacra that collapses historical styles into a dimension not governed by strict chronology. Reveling in the absurdity of his scenes, Greenwald invites his audience to momentarily become the passenger of a vessel suspended in a continuum. 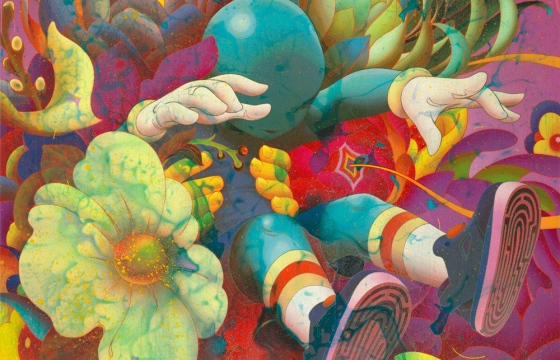