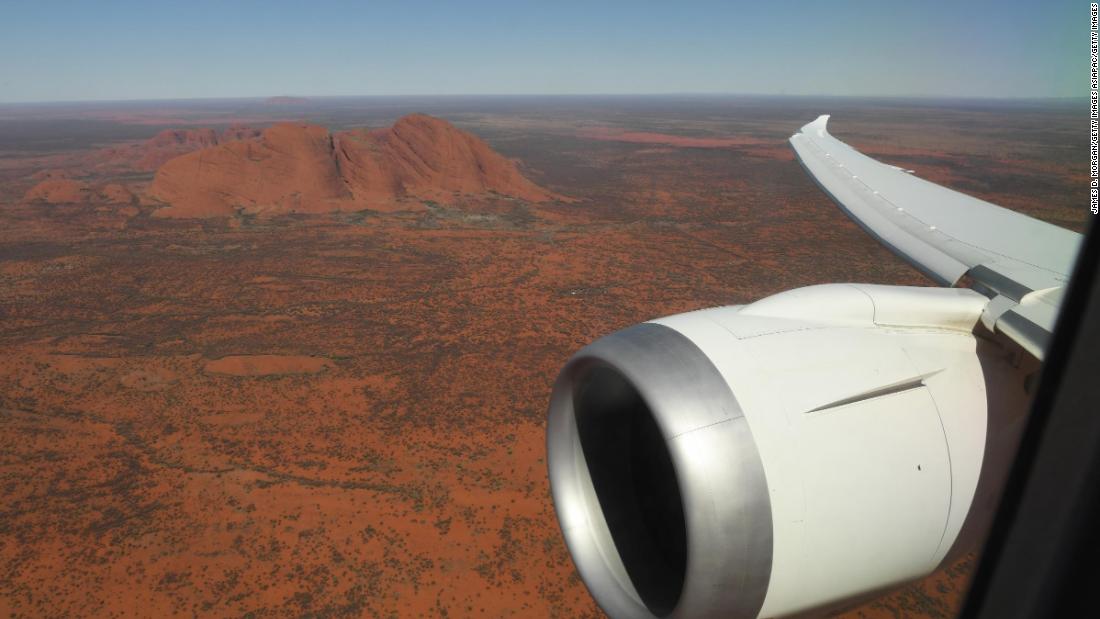 (CNN) — Pre-pandemic, the idea of airlines advertising flights to nowhere, in which passengers land in the same place they took off, would have been almost unthinkable.

But as Covid-19 grounded much of the world’s airplane fleet, airlines started getting creative and a new mini-aviation trend was born.

Now we’re in year three of the pandemic and with travel restrictions easing even amid Omicron uncertainties, many airlines told CNN Travel they were moving away from flights to nowhere and focusing on restoring their proper schedules, although there are still exceptions.

Flights to nowhere have generally operated in destinations with some of the strictest pandemic travel restrictions.

Australia’s border was totally shut at the time of Qantas’ fall 2020 flight, which departed Sydney, taking in sites from Byron Bay and the Gold Coast to the Great Barrier Reef and Uluru from the air before returning to Sydney.
Aussie travel remained restricted when Qantas organized subsequent “mystery” flights to nowhere, and its 2021 supermoon flight.

A Qantas spokesperson told CNN Travel the airline was “absolutely overwhelmed” by the popularity of these offerings.

“These flights offered unique opportunities to our customers who missed the experience of flying and excitement of travel, as well as creating more work for our people, keeping our aircraft active and promoting Australian tourism,” said the spokesperson.

Australian residents can now travel more easily, and while the border remains closed to other arrivals, a full reopening is expected this year.

The Qantas spokesperson suggested that as a result, the airline is focused on resuming more regular operations, but didn’t rule out the return of the flight to nowhere.

Taiwan’s EVA Air said its sightseeing flights were designed “to give passengers opportunities to experience the fun of flight and see the world from a new perspective at a time when most international borders are closed or heavily restricted.”

Travel remains curtailed in Taiwan, but the airline specified that flights to nowhere were offered between August 2020 and April 2021, stating there were no current plans to bring them back.

Many of the world’s airlines never engaged with the flight to nowhere concept at all with some, like Qatar Airways, able to maintain regular schedules.

“Our focus has remained on taking people home and meeting the challenges posed by the global crisis,” a spokesperson for Qatar Airways said.

In the US, where airlines continued to operate domestic flights throughout the pandemic, flights to nowhere didn’t take off.

Other airlines made use of their grounded fleets in other ways.

While Singapore Airlines was rumored to be considering operating sightseeing flights in the fall of 2020, a spokesperson told CNN Travel that it chose to prioritize “a series of initiatives aboard aircraft parked at gates,” namely its superjumbo-based “Restaurant A380” pop-up at Singapore Changi airport.

Japan’s All Nippon Airways — the only carrier to confirm plans to continue sightseeing flights into 2022 — has also embraced other aviation-themed initiatives, from selling inflight meals online to turning aircraft into restaurants and has plans to host weddings on its grounded A380.

All Nippon Airways has a Boeing 767 sightseeing flight scheduled for January 30 and two A380 flights to nowhere in the calendar for February.

Passenger Ke Huang took this photo of Sydney from the first Qantas flight to nowhere in October 2020.

Travel and aviation enthusiast Ke Huang was on board Qantas’ first flight to nowhere in the fall of 2020.

“To fly at a low height over these locations was truly unique,” Huang told CNN Travel at the time.

Speaking more recently, Huang said he looked back on the flight fondly, but has since been taking full advantage of Australia’s eased border restrictions to travel.

“Now that Australian citizens are able to travel internationally and return without quarantine, I think some of the public interest has sort of waned a little bit in that regard, and I don’t think there’ll be any of those similar flights put on in the foreseeable future,” Huang said.

Still, the frequent flier didn’t rule out a future trip on a sightseeing flight, especially if borders closed again.

A passenger trying to capture a photo of the supermoon from Qantas’ Supermoon scenic flight in May 2021.

Dr Tony Johnston, head of the Department of Hospitality, Tourism and Leisure at Ireland’s Technological University of the Shannon, said the flight to nowhere’s early pandemic “novelty role” was unlikely to be sustained.

“It is unlikely to further develop as a service in 2022,” Johnston told CNN Travel. “As a product, it is not particularly cheap and without the payoff of actually getting somewhere, I would not anticipate consumer interest making it commercially viable, especially in the context of increasing fuel prices and landing charges.”

Johnston also suggested destinations will be looking to prioritize tourism in 2022, and will be hesitant to close borders.

“With the virus now widespread globally — and with increased vaccination rates — it is unlikely we will face the same levels of border restrictions as we did in 2020 and to a lesser extent in 2021,” he said.

“Policymakers frequently default to the familiar, and the lure of tourism income will likely prove very strong in 2022. Open borders are therefore likely to make the service redundant.”

Qantas’ October 2020 flight to nowhere flying over the Great Barrier Reef in Australia.

When airlines first started selling tickets for flights to nowhere, questions were immediately raised around their sustainability credentials.

“This flight may go nowhere but planet-wrecking emissions have to go somewhere. That somewhere is straight into the atmosphere where they contribute to climate breakdown,” a spokesperson for Friends of the Earth told CNN Travel back in October 2020, following Qantas’ first sightseeing trip.
Qantas said 100% of emissions from its scenic excursions were offset, while EVA Air invited passengers to offset emissions via its carbon calculator. An EVA spokesperson added that the airline deliberately flew more fuel-efficient Boeing 787-Dreamliners on many of its scenic flights.

Meanwhile, a spokesperson for All Nippon Airways told CNN Travel that the airline had pledged to “reduce carbon emissions from aircraft operations to net zero by 2050.”

“We are aware of the criticism toward the charter flights, but as we aim to keep our fleets ready for immediate use, from time to time the airplanes have to be flown to be considered airworthy, and we utilize these maintenance certification flights for certain activities,” said the All Nippon Airways spokesperson.

Even airlines which have not operated commercial flights to nowhere have been criticized for unnecessary flying during the pandemic — either to keep airplanes and pilots in practice, or to keep hold of coveted airport slots.

Passenger Ke Huang said he was conscious of the environmental impact of flights to nowhere — “I understand some of the criticism,” he said.

He added that he was pleased Qantas offset emissions, but also pointed to the airport slot controversy.

“There is a counter-argument saying it’s not just consumers who might be the cause, also government red tape might be partially causing the problem, too.”

Tourism expert Johnston suggested many travelers are becoming more conscious of the impact of their flying habits, and this increased awareness could be the nail in the coffin for the flight to nowhere.

“While there has always been an attitude-actions gap in tourism, it is clear that consumer interest in personal carbon reduction is growing,” he said.

Johnston suggested that continuing sightseeing flights once more regular flight schedules have been reinstated would be difficult for airlines to justify.

“While the airline sector does not have the best record on carbon emissions, even the most hedonistic airline would find this a challenging product to justify and an easy target for regulators,” he added.

“There is a wide range in quality of offsetting schemes and this alone does not eliminate the impact of these flights,” he told CNN Travel.

Stettler suggested airlines could run flights to nowhere with sustainable aviation fuels, which would improve matters, and “in a small way” support demand for such fuels.

But Stettler’s baseline is that flights to nowhere aren’t sustainable.

“From an environmental perspective, these flights are wasteful and lead to the production of unnecessary emissions,” he said.

While a handful of flights to nowhere are still currently scheduled for 2022, tourism expert Johnston suggested they’re unlikely to remain a feature of the aviation schedule.

“My expectation is that we will look back on the ‘flight to nowhere’ as a really unusual quirk of the pandemic,” he said.

As for passenger Ke Yuang, he said the flight to nowhere made use of a “very captive audience.”

“But travel is now progressing further and further towards pre-pandemic,” Yuang said. “Those scenic flights are probably less and less feasible, and less and less likely that they’ll occur again.”

Still, as an aviation fanatic, Yuang said he’s still glad he had the experience of flying at a time when the world stood still.

“People like me, we’re grateful to have had the opportunities, I take them when they’re offered.”