Far from being simply ‘greedy’ or ‘loving food’, these people say they have an addiction as strong as any gambler, alcoholic or chain-smoker.

Their need to eat takes over their life, isolating them from loved ones, causing job losses, estrangement and physical and mental harm.

While some will become addicted to unhealthy foods such as cream cakes, chocolate or pizza and gain a lot of weight as a result, that’s not always the case.

Lauren Webb, 33, a healer from Cornwall, was always slim and healthy before her ‘addiction’ — which initially involved fruit and veg.

Lauren Webb (pictured), 33, a healer from Cornwall, said sometimes she would stand at the fridge for hours

‘My addiction didn’t even start with ‘bad’ foods,’ she says.

‘I was working in private equity in my 20s in a stressful job and had been doing yoga to de-stress.

‘After one session I opened my eyes and just craved food like I’d never done before. I went out and bought a ton of food and didn’t stop eating all day.’ At that point her food addiction involved raw vegetables, fruit and vegan foods.

‘I believed I was being healthy because I wasn’t eating junk or chocolate, but I was still thinking about food all the time,’ she says.

Lauren says sometimes she’d stand at the fridge eating for hours and would black out from overeating before waking up on the floor.

‘This would happen regularly,’ she says. (Blacking out after eating, or postprandial hypotension, occurs when food is emptied too rapidly from the stomach, and can lead to drowsiness and fainting. It usually occurs in diabetes and those aged over 70 but can happen during bouts of extreme overeating.)

Lauren adds: ‘I couldn’t eat just one apple, it had to be seven. I couldn’t stop thinking about it and when I would next eat.’

Those affected by food addiction typically describe finding it difficult to watch others leave food uneaten on their plates — one woman we spoke to said she’d even eat other people’s leftovers.

Over several weeks Lauren moved from raw foods to vegan ice cream, which she ate throughout the day.

‘I then dated someone who ate processed food and got into that too, and gained about 40 lb over a few months because I was still eating so much,’ she says.

‘It made me think about food constantly, then feel bad. It was an endless cycle.’

Many food ‘addicts’ will obsess over recipes and meals, and even snacks may be planned days in advance.

It was only when Lauren went on a yoga retreat and met a recovering alcoholic that she realised what was going wrong.

‘This lady said she recognised the same addictive traits in me — only with food,’ she says.

‘It was then that I realised I wasn’t just an overeater, I had a food addiction, just like any other addiction.’ 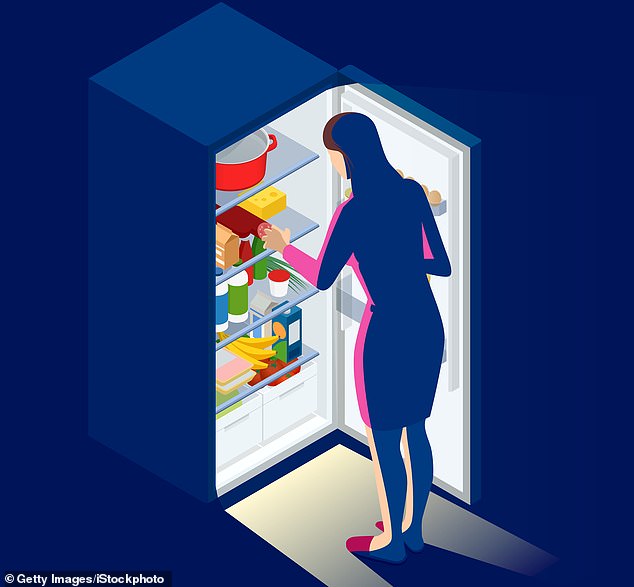 Yet food addiction is a controversial diagnosis, and not one widely recognised — unlike alcohol addiction, for instance, it’s not in the World Health Organisation’s International Classification of Diseases.

‘Addiction’ is probably the wrong word, says Jane Ogden, a professor of health psychology at the University of Surrey.

‘The classical term of addiction means that you develop tolerance to something and you get withdrawal when you don’t have it any longer,’ she explains.

‘But it also suggests that there are some kind of brain and biological responses to the substance and that is the level at which the addiction happens.’

She says although there is a ‘strong psychological component’ to drug, alcohol or nicotine addiction, ‘with food, it is far more psychological than it is biological’.

‘So it’s probably not what I would call classically an addiction but people have definitely built an unhealthy relationship with food. Perhaps we should call it a dependency.’

But Dr Jen Unwin, a clinical psychologist in Southport, argues an addiction to food is as real as with alcohol or nicotine. However, unlike alcohol or drugs, food is something we all need, making it harder to see it as an addiction, she argues.

Dr Unwin says that most of those affected seem to crave sugar, grains (including flour) and ultra-processed foods such as pizza and doughnuts. ‘But everyone is different,’ she says. ‘For example, I cannot moderate my intake of nuts, so I have to avoid them.’

How our brains react to certain foods is key to understanding food addiction, says Dr Unwin, because we’re hardwired for survival.

In evolutionary terms, finding high-calorie foods such as nuts and sweet foods meant a better chance of survival and triggers a spike in dopamine, the brain chemical linked with pleasure and motivation.

So we are motivated to find and eat them again. ‘Back in prehistoric times, it would make real sense to overeat foods such as nuts because we’d need to put weight on to survive,’ she says.

‘The trouble is, we only have to stroll to the corner shop, but we are still overwhelmed with the triggers and smells of reward, such as the smell of the bakery.’

After dopamine, explains Dr Unwin, we then get a serotonin hit from food — a boost in the happy hormone.

‘After a big meal or a nice piece of cake, your insulin levels [needed to mop up the sugar from your bloodstream] go up and this makes tryptophan — an amino acid — spill more easily across the blood-brain barrier, causing an increase in serotonin,’ says Dr Unwin.

But as well as evolutionary factors, habit and comfort play big roles in food addiction. ‘For some people food is an emotional comfort and that can become embedded,’ says Dr Unwin.

Professor Ogden confirms this, saying: ‘We plug food into lots of different components in our lives — so, when you have afternoon tea you have a muffin, when you’re feeling sad you have some cake, when you want to celebrate you go out for dinner.

‘Even when you’re watching TV you eat crisps. It plugs into your day in a way that becomes a habit and then you attach emotions to it.’ Meanwhile, Lauren has used a combination of yoga and mindfulness to help her — and uses what she’s gone through to heal others.

‘I’d start the day with the terror of knowing food would dominate my thoughts but I learned to meditate and tell myself I didn’t have to eat as much,’ she says. ‘Just like with any other addiction, you have to want to change.’

She now does not think about food as much and has lost some of the 40 lb she gained. But she says: ‘The worry is always there — will it come back?’

Professor Ogden says: ‘If you believe you are dependent on food, keeping a food diary can help. Writing down what you have eaten and where every day can help you identify the triggers.

‘Try and remove those emotional triggers by finding something else that can be a substitute — going for a walk, talking to a friend, taking up an absorbing hobby and getting through that ‘peak’ of need.

‘Then remind yourself you came through the peak and be really proud of yourself for doing so.’

Tweaks to dental hygiene that can make a difference. This week: don’t use mouthwash after brushing your teeth

It might sound counter-intuitive, but it is best to avoid mouthwash after cleaning your teeth.

Around two thirds of us rinse our mouths with water following brushing, according to surveys.

However, this will wash away any residual fluoride-based toothpaste, which strengthens the tooth enamel. 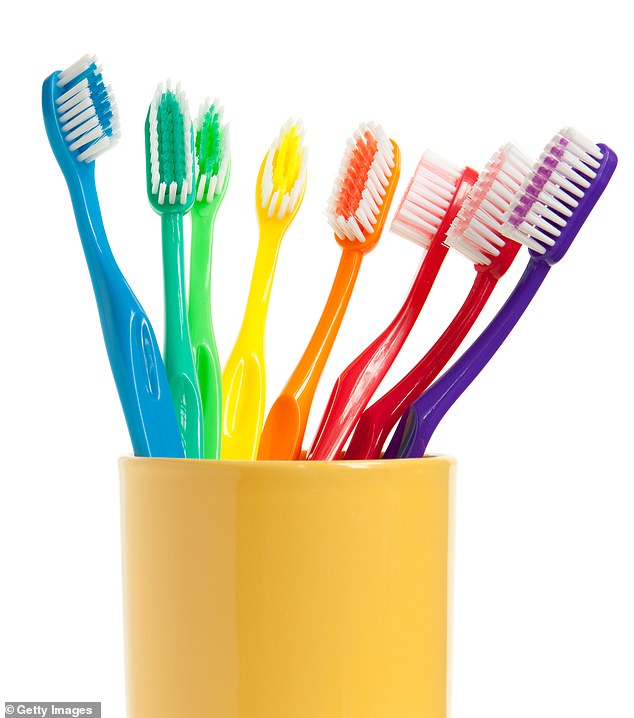 It might sound counter-intuitive, but it is best to avoid mouthwash after cleaning your teeth. (Stock image)

Fluoride also reduces the acid on your teeth (produced when bacteria feed on the food you eat).

‘Never rinse after brushing,’ says Lance Knight, a dentist based in central Manchester.

Similarly, he adds that it’s better not to use mouthwash straight after brushing your teeth, because it will also wash away the fluoride from your toothpaste. Rinse after meals instead.

This week: Arthritis and migraine

People who suffer from the joint pain of arthritis may be at greater risk of migraines too.

Arthritis and migraines may appear to have little in common, but research in the Journal of Clinical Medicine last year, based on more than 2,500 people, revealed arthritis sufferers — both those with wear-and-tear osteoarthritis and autoimmune condition rheumatoid arthritis — have an 83 per cent higher risk of migraines, and that women with arthritis were 2.3 times more likely to be diagnosed with migraine.

The researchers, from the University of Barcelona and other centres, suggest that ‘some consequences of arthritis are also triggers for migraines, including sleep disturbances, stress and distress, and neck pain’.

Other possible explanations include exercise — which is recommended for arthritis sufferers but can trigger migraines; and inflammation — known to play a role in both conditions (around the joint in the knee and in the arteries in migraine).

Both conditions have also been linked with an imbalance of gut bacteria.

Are Radishes The New Cauliflower?