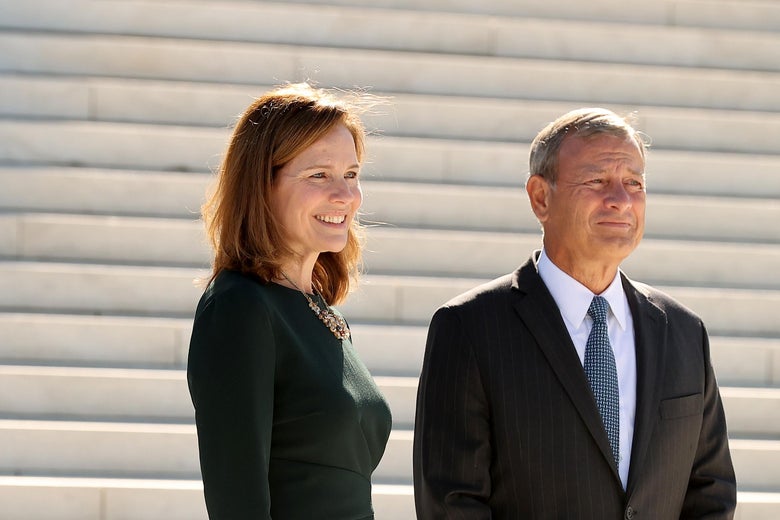 This morning, the Supreme Court is hearing arguments in Dobbs v. Jackson Women’s Health, a case that explicitly asks the high court to overturn Roe v. Wade. Astute listeners are trying to take their clues about the fate of Roe from the questions of the three justices whose votes are unknown—Chief Justice John Roberts, Brett Kavanaugh, and Amy Coney Barrett. This set of conservative justices, while listening to arguments about Texas’ notorious S.B. 8 last month, demonstrated some hesitation about overturning Roe and further dismantling the inherent legitimacy of the highest court in the land.

Things haven’t been going well for anyone interested in the court upholding a woman’s right to choose. Just about an hour into arguments, Barrett asked a question that seemed more revealing of her vote than anything else thus far. It was about adoption—as the junior justice put it:

So petitioner points out that in all 50 states, you can terminate parental rights by relinquishing a child after abortion [Ed. note: She misspoke; she meant birth], and I think the shortest period might be 48 hours if I’m remembering the data correctly. It seems to me, seen in that light, both Roe and Casey emphasize the burdens of parenting. And insofar as you and many of your amici focus on the ways in which forced parenting, forced motherhood would hinder women’s access to the workplace, and to equal opportunities, it’s also focused on the consequences of parenting and the obligations of motherhood that flow from pregnancy—why don’t the safe haven laws take care of that problem? It seems to me that it focuses the burden much more narrowly. There is without question an infringement on bodily autonomy, for which we have another context like vaccines. However, it doesn’t seem to me to follow that pregnancy and then parenthood are all part of the same burden, and so it seems to me that the choice, more focused, would be between, say, the ability to get an abortion at 23 weeks, or the state requiring the woman to go 15, 16 weeks more, and then terminate parental rights at the conclusion. Why didn’t you address the safe haven laws, and why don’t they matter?

A daily email update of the stories you need to read right now.

You can listen to the lawyer for Jackson Women’s Health attempting to answer Barrett’s question below. First, the lawyer points out that adoption has indeed existed since Roe was first decided and therefore changes to adoption should not mean much. Then, she goes on to make the obvious points that pregnancy and birth in particular have dramatic effects on a woman’s health, and later she suggests that the choice to give a child up for adoption is its own burden, not something to lightly suggest is easy.

This question from Amy Coney Barrett is basically game over for Roe. She says: Now that all 50 states have “safe haven” laws that let women relinquish parental rights after birth, the burdens of parenthood discussed in Roe and Casey are irrelevant, and the decisions are obsolete. pic.twitter.com/omyhGISVmN

More from Barrett: “Actually, as I read Roe and Casey, they don’t talk very much about adoption. It’s a passing reference that means out of the obligations of parenthood.” She’s adopting Mississippi’s argument that the availability of adoption obviates the need for abortion. pic.twitter.com/p3DvkSTakA

But Barrett did not seem convinced, replying that neither Roe nor Casey spends much time on adoption, once again suggesting that the existence of adoption might obviate the need for abortion.

One of the main arguments the state of Mississippi is making in this case is that pregnancy, and parenthood by extension, is no longer burdensome because of many economic and social developments that make pregnancy safer and parenting easier. (They’re wrong, as Mark Stern points out here.) During arguments today, it appears Barrett is adding adoption to that list, suggesting it’s easy to carry a child to term and easy to give that child up. Perhaps it’s relevant to point out that Barrett is a mother of seven, including two children who are adopted. Roberts has two adopted children, and Justice Clarence Thomas has an adopted child as well.