Reeling after the biggest cyberattack in Israeli health history, hospitals are taking some of their IT systems offline in order to reduce vulnerability.

On Wednesday, Hillel Yaffe Medical Center in Hadera was hit by a still-unresolved ransomware attack, forcing the hospital to shut down its technology network and causing delays in care.

While the hospital was the only one affected, other medical centers are taking precautions out of fear they will be hit with a follow-up attack. Cybersecurity teams are working around the clock, checking systems and upgrading defenses, the Shaare Zedek Medical Center in Jerusalem said.

“It’s not necessarily over yet,” Rivka Rudensky, IT chief at the hospital, told The Times of Israel on Thursday.

“Everyone is on the edge of their chairs, trying to make sure it’s over, but we are still meeting and taking steps,” she said, calling the scenario “the nightmare of anyone in my job.”

The National Cyber Directorate said on Wednesday that there were heightened fears of other hospitals being targeted, putting all other hospitals on high alert and leading many to take non-essential systems offline.

“After the attack I took offline anything that was not necessary for the hospital to run,” Radovsky said.

This included much of the infrastructure used by staff to access records when away from the campus, and systems that let patients view their medical records.

Computers are central to every aspect of operations in Israel’s highly digitized health system. For years, hospitals have feared a ransomware attack like those that have crippled regional health systems in the US and elsewhere.

“We were ready for this,” said Avi Shushan, spokesman for Tel Aviv Sourasky Medical Center. “We practiced, and we knew that being protected is a number one priority.”

The attack, and the foreboding that another may be in the works, has created a feeling of unease normally experienced after mass-casualty incidents, according to Rudensky.

“When I heard, it was like the feeling when I hear an air-raid siren, and I raced to the hospital,” she said. “It felt like an emergency scenario.” 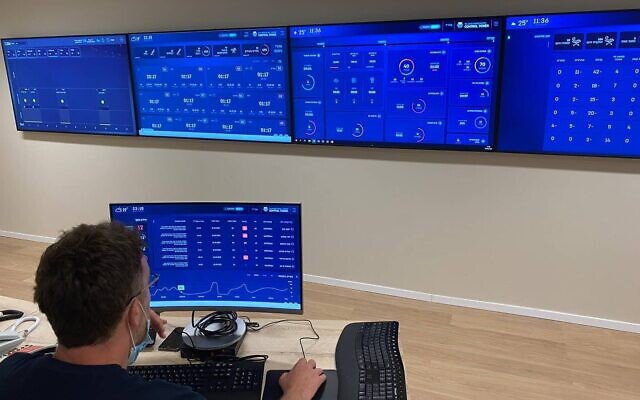 A control room at Sheba Medical Center in Ramat Gan. (courtesy of CLEW)

She has since overseen the updating of all systems, checked all servers for security and assessed all WiFi networks.

Just in case, doctors have been directed to the guidebook she wrote on how to temporarily manage without computers.

Eyal Zimlichman, chief medical officer at Sheba Medical Center near Tel Aviv, told The Times of Israel that a system that communicates administrative data between several hospitals had been taken offline.

“We have been planning for attacks like this but the question is how good the attackers are, and whether they can they bypass the defenses,” he said. “Good hackers can hack in to anything. Now, after hospital has been attacked, others are taking precautions.”

You get Israel news… but do you GET it? Here’s your chance to understand not only the big picture that we cover on these pages, but also the critical, juicy details of life in Israel.

In Streetwise Hebrew for the Times of Israel Community, each month we’ll learn several colloquial Hebrew phrases around a common theme. These are bite-size audio Hebrew classes that we think you’ll really enjoy.


You’re serious. We appreciate that!


We’re really pleased that you’ve read X Times of Israel articles in the past month.

That’s why we come to work every day – to provide discerning readers like you with must-read coverage of Israel and the Jewish world.

So now we have a request. Unlike other news outlets, we haven’t put up a paywall. But as the journalism we do is costly, we invite readers for whom The Times of Israel has become important to help support our work by joining The Times of Israel Community.

For as little as $6 a month you can help support our quality journalism while enjoying The Times of Israel AD-FREE, as well as accessing exclusive content available only to Times of Israel Community members.